Tainan is the former capital city of Taiwan, and the city with most historical buildings and temples. As most buildings in Taiwan are only a few dozen years old and modern Taiwanese “architecture” appears rather soulless and ugly to us westerns, ever since I arrived here I have been looking forward to visiting this jewel and resting my eyes on some history. 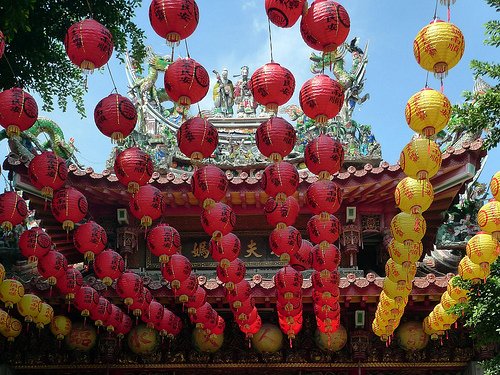 Somehow the opportunity only came recently. During a mountain trek I became friend with a young man who works in Taipei but whose family lives in Tainan and he offered to be my guide in his hometown, promising to take me to taste all the delicious snacks the city is famous for. These attract at least as many Taiwanese tourists as the ancient buildings, but probably more. He also invited me to have dinner at his parents' house. For us uprooted foreigners far from our own families such invitations are always very touching.

So on a Saturday morning mid August I met my guide and his girlfriend in Tainan. As I got in the car full of excitement for the day ahead, he said with a smile: “I told my parents that you've studied Chinese medicine and tonight they all want you to take their pulse”. A knot gripped my stomach. Pulse is the diagnostic tool I feel least confident about, especially after three years of being more or less out of practice. Conversely, the Taiwanese are fascinated by the “mystery” of pulse taking and believe that all (good) Chinese doctors can penetrate all the facts and the secrets of one's health and history by feeling their pulse only.

For a while I struggled to ignore the Damocles' sword that I felt over my head and still enjoy the day. Then the smoked tofu, the tea-eggs, the rice noodles, the melon tea and the soft tofu in sweet syrup somehow managed to distract me. But what really made me forget all anxieties was the Anping Tree house, an abandoned warehouse that once belonged to a British merchant and that has been engulfed by a huge banyan tree. When I was a child I used to imagine what would happen if humans disappeared from the Earth, how nature would take over our house, my school, the streetsâ€¦ well, the Tree House goes even beyond my childhood imagination. 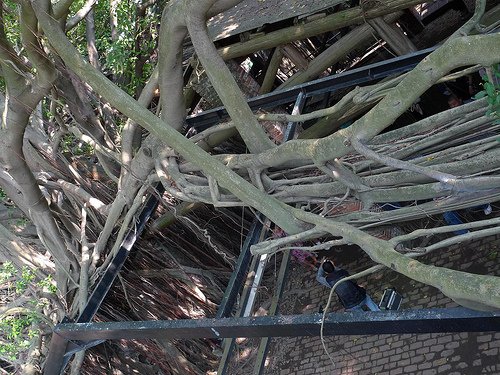 We also visited Chihkan Tower, a Qing Dynasty educational and religious complex built on the remains of a Dutch fort (the Dutch occupied Taiwan during the 17th century) and walked along the streets, taking in the sights. 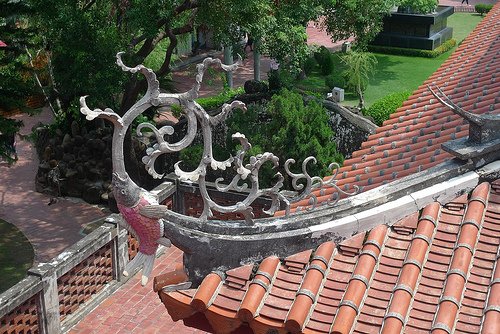 Evening came. We went back to my friend's house for dinner and I brought a box of custard apples I had bought in Taidong the day before. Good quality fruit is an appropriate and welcome gift here.

The whole family was particularly welcoming and friendly. All Taiwanese say how people in the south are friendlier, especially friendlier than those living in Taipei, and it is true. I wasn't treated like an “curious foreigner” but rather like an old friend they hadn't seen for a while. I was taken around the whole house, room by room, shown the collection of stones and handicrafts from their trips abroad and the father helped me read the piece of calligraphy in the living room that listed the principles of how to run a good business he has followed throughout his life. We talked about their trips to Europe and their love for Italy.

The subject of my studies also came up, together with big smiles and wrists being pointed at me: “Take my pulse! Take my pulse!” I humbly explained that my skills are not that good and that the reason why I am here in Taiwan is to continue my studies with local doctors, who are more knowledgeable and experienced then I am, and that a Taiwanese doctor would be able to tell them a lot more about their health than I would.

I have been in this situation before and this line has never worked that well. Somehow this time it did! What a relief! Dinner was ready, the wrists were pulled back into the sleeves, the dishes were taken out of the kitchen and onto the table, and we all dag in happily. The food was delicious.

Towards the end of dinner, the mother started telling me about a health concern of hers: flushes of heat rising up to her neck and face, bringing redness and itching. She told me that various doctors had told her that it is an allergic reaction and she asked me what I thought. She is in her late fifties, very active and with a thin body frame. Upon questioning, she told me that leaning over the wok when cooking, and eating spicy foods can bring on or aggravate both itching and flushing. Being anxious or under pressure have the same effect and can also cause palpitations. She doesn't sleep well and can be restless at night.

When she thrust out her wrist again and said: “Take my pulse” I took her hand without even thinking. It was a natural development of our conversation and I had some information to orient myself. Luckily there were no big surprises as it confirmed the picture of liver and kidney yin and blood vacuity with heat flaming upward that had been forming in my mind. Her pulse was overall fine, especially on the left side, weaker at the cubit and notably stronger, stringlike at the left cun. I told her what I felt and wove it together with the pieces of information she had given me, her son helping with the translation whenever my Chinese failed me.

Our conversation was followed by the rest of the family. As soon as there was a long enough pause, the aunty said: my shoulder has been hurting for long time. I realised she had already mentioned this a few times during the evening. I ended up doing a palpatory differentiation of the channel in her arm and giving her a seated shiatsu session, focused on draining her large intestine channel, which was remarkably replete. The shoulder gradually loosened up and gained in movement range. She works in the family business and often lifts heavy boxes. As many Taiwanese people of her generation, she has an exercise routine she performs every morning — so we discussed what stretches and movements would be most beneficial to her shoulders.

During the session the father was reminding me that he wanted his pulse taken, too, the mother that she, too had a bad shoulder, the teenage cousins were observing with curiosity, while my friend kept giggling in the background and apologising in English, which the older generation did not speak, for me having to “pay” for my dinner by being a “one night doctor”.

After the auntie it was the father's turn. His pulse felt strong, present at all levels, healthy if a little tight. As he didn't have any pain in his body nor obvious cold sign, I wondered whether it was simply a sign of a strong constitution with some qi stagnation — possibly due to the pressure of running the family business. I said so, and the son told me — in English again and laughing — that the father actually runs a particularly laid back life, while the one who takes the brunt of running their company is the mother.

In the meanwhile, people were making sure that I kept hydrated and didn't go hungry (is that ever possible in Taiwan?) by bringing me glasses of water and adding snacks onto the table, including preserved sour plums, “which will help your digestion”, they reassured me.

Then the mother insisted to have her shoulder worked on. Doing seated shiatsu on her wouldn't have been appropriate. The muscles in her upper body had a brittle quality to them, which confirmed the previous yin vacuity differentiation, and wouldn't have responded well to dynamic techniques, nor to working exclusively on her upper body — as in the auntie's case. So everybody helped clearing the couch and I had her lying in side position, which allowed for yin-nourishing techniques on her legs as well as careful mobilisations of her arm and shoulder.

The atmosphere was very lively, everybody was commenting, asking questions, smiling, wiggling about their shoulders, checking their own pulse. Then the two parents and the auntie started chatting in Taiwanese, of which I don't understand a word. I asked my friend what they were saying and they were discussing giving me a “red envelope”, a metonymy for “money”, as money given as a gift or a reward is always politely placed inside a red envelope. I said that there was no way I was going to accept money from his family and after some more discussions, I was offered some preserved plums and other health foods to take back home.

It was a very special experience, for a variety of reason.

As a foreigner here, I am often in the position of receive — hospitality, information, help — and I rarely have the opportunity to give.

Besides that, Taiwanese society is highly hierarchical and people often play specific and set roles for each other. On the contrary this evening was imbued with a very playful atmosphere and it felt like an exchange between equals.

Finally, Taiwanese people rarely touch each other. Physical contact in public is very rare. Handshakes are an uncommon way to greet one-another and friends don't normally hug. Even couples, with the exception of the youngest generations, walk on the street side by side, without holding hands or other physical contact. Physical therapy of course is an exception and people do go for massage sessions - but then blind practitioners are preferred. Outside this professional context, daughters can be seen massaging their mothers' shoulders.

I'll be back in Tainan, to see the Confucius Temple and the Water Fairy Temple Market, try the “Coffin bread” and danzi noodles and off course to visit my new friends.