Please click here to view more pictures and the article as a word document.

As you approach Avicenna, one of the first things you might experience is an assault on the olfactory senses! We have over 450 different herbs here in our dispensary and often, during the decocting process, we are overwhelmed by an array of aromas. However, the prevalent odour is usually from the process of Moxibustion. This is the traditional Chinese Medicine technique of burning Artemisia vulgaris, known mostly as Mugwort or Chinese Moxa, a small, spongy, plant, native to temperate Asia and Europe but now found all over the world.  The leaves are dried, aged and ground to a fluff, which can be processed into a cone or stick, or burnt as it is. 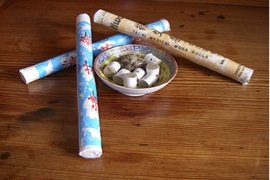 Moxibustion is mostly used in conjunction with acupuncture and is used to promote healing, strengthen the blood, warm the meridians, stimulate the flow of Qi, remove cold elements from the body and maintain general health. It can even add new Qi to the body, meaning it can be used for both excess and deficient conditions, unlike acupuncture, which requires the patient to already have an adequate amount of Qi available in the body. It is therefore particularly useful in the treatment of weaker patients.

In fact, moxibustion is said to predate acupuncture with needles being added as a supplement after the 2nd century BC. The two Chinese characters that are frequently translated into ‘acupuncture,’ Zhen Jiu, seen below, represent firstly a needle piercing the skin and secondly, the fluffy, dried leaves of moxa.

There are two types of moxibustion: direct and indirect. Indirect is currently the most popular form of use and you may have experienced it at the clinic. A cigar shaped, moxa stick is lit and held close to the area being treated to heat it, or, a needle is inserted into an acupuncture point and the exposed tip of the needle is covered, either with a Moxa cone or wrapped in Moxa which is then lit and left to burn, heating the point and its surrounding area.

Direct use of Moxa is split into two types, the most common modern day use in Europe and at Avicenna is non-scarring where the moxa is placed on an acupuncture point and lit but removed or extinguished before it burns the skin.  Scarring, the second type, as the name implies, is where the moxa is left on the skin until it has completely burnt out, leading to localised blisters and scarring. This means that the area is affected for longer as the body heals itself, “The scab allows the treatment to continue working. The scar won’t disappear until the problem is healed. The fire must touch the physical body. When you burn the skin, it affects the spiritual body as well as the physical body,” is the view of Japanese Shinto Priest, Hideo Izumoto. A practice for the more hardened acupuncture patient and not something we would practice in our clinic!

Moxa may also be burnt on ginger or garlic so that the skin is isolated from extreme heat. Filling the navel with cooking salt, putting a slice of fresh ginger over the salt then burning moxa on the top is said to rouse certain coma patients.

What about the pungent plant itself? Mugwort has a rich heritage, steeped in folklore, spanning many centuries and several continents; it’s used in countless ways including a culinary spice and a dream inducing aid to astral travel! It has a whole host of nick names such as: wild wormwood, sailor’s tobacco, felon herb, chrysanthemum weed, traveller’s plant, naughty man and St. John’s Plant, not to be confused with St. John’s Wort. Some believe that St John the Baptist wore a belt woven from the plant, giving it it’s name. It is found in most parts of England on hedge banks, waysides and many uncultivated areas – some consider it an invasive weed. It was often planted along roadways to provide good fortune to travellers and it’s claimed that the Romans also planted it on roadsides so that their soldiers could put it in their sandals on long marches to ease their sore feet. During the Dragon Festival in China bunches of moxa are hung around the house to keep away evil spirits and women can be seen wearing moxa charms.

In ancient Greece, Hippocrates prescribed it for most female complaints, especially childbirth and menopause. Ayurvedic medicine has used mugwort for complaints of the female reproductive system, nervous complaints and as a wash for fungal infections.

It is also used internally in Chinese Medicine for menstrual conditions and uterine warming amongst other conditions.

In Anglo-Saxon times it was one of the nine sacred herbs given to the world to repel evil and poisons by the god, Woden. Called the "Mother of Herbs," St. John's Plant was associated with witchcraft and fertility rites.  Placed under a pillow, it was said to reveal the future in dreams. Some Native American tribes also used mugwort as a smudging herb to clear and cleanse sacred spaces and to increase the power of their dreams.

In Western herbal medicine Mugwort is used to treat a variety of parasitic infections, including tapeworm, threadworm and roundworm, plus parasitic infection on the skin such as ringworm. It is used to help calm nervous disorders, muscle spasms and digestion problems, it helps aid blood circulation and is an effective remedy for abdominal pain brought on by cold conditions.

On a culinary note, mugwort has also been used in England as a tea substitute and for brewing beer. In France, it was used for some time, due to it’s high Thujone content, as an ingredient in the infamous, Absinthe, “drug of the age,” in late 19th- and early 20th-century, particularly among bohemian Parisian artists and writers.  In Germany mugwort is used as a spice for roast goose, a traditional Christmas food (weihnachtsgans). Either a few sprigs of mugwort are placed in the bird's cavity before baking or, if the goose is to be stuffed, the stuffing is flavoured with mugwort. It is also used in China, Japan and Korea to flavour soups, rice cakes and other dishes.

Returning to modern science, a study published in the Journal of the American Medical Association (Cardini F, Weixin H.) in 1998 found that 75% of women suffering from breech symptoms before childbirth had foetuses that turned to the normal position after receiving moxibustion at an acupuncture point on the Bladder meridian, compared to 48% in the control group.

What an incredible and versatile plant and we’ve only scratched the surface of it’s many uses! I hope that next time you visit the clinic, the ‘Avicenna smell’ will mean a lot more to you!